At JBS Dog Photography we like to give something back to the dawg community.  The cost of pet photography is prohibitive for dawg foster carers hence we like to off complimentary photography for all dawgs that are looking for a new home. Over the last year, we have had the pleasure of photographing a lot of rescue dogs from Romania which lead me to photograph Buster.
After talking with the owners about why they rescued a Romanian dog, I decided it was time for me to investigate as to why so many dogs are coming over from Romania. After my research, I was shocked at what I read, and that is why I wanted to make contact with a Norfolk dog rescue centre.

Via a friend of a friend of a friend, I was put in touch with the lovely Jeni who had fostered Buster and was looking for that loving family to adopt him. After a quick email exchange, Buster was booked into our Swaffham Dog Photography studio for some amazing dog pictures that can be shared all over the web to find that person who will fall in love with Buster and adopt him. 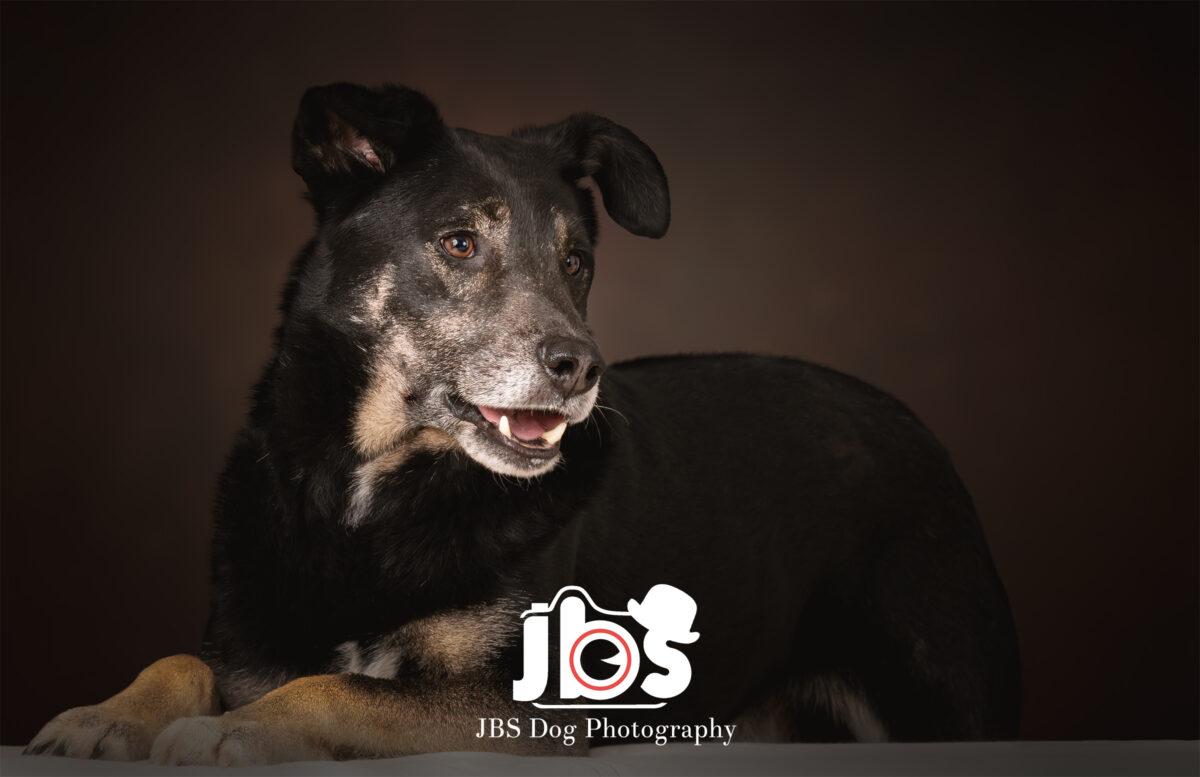 Buster was scared to even walk into the studio but with some time and patience, he came and very carefully checked out the studio. Jeni’s other dog Taz was just roaring around and hoovering up any treats that I had placed around the studio. You really have to appreciate what has happened to Buster and what a truly horrible life he has had up until now, but despite this, you can truly see he has nothing but love to give to the family who wants to adopt him. 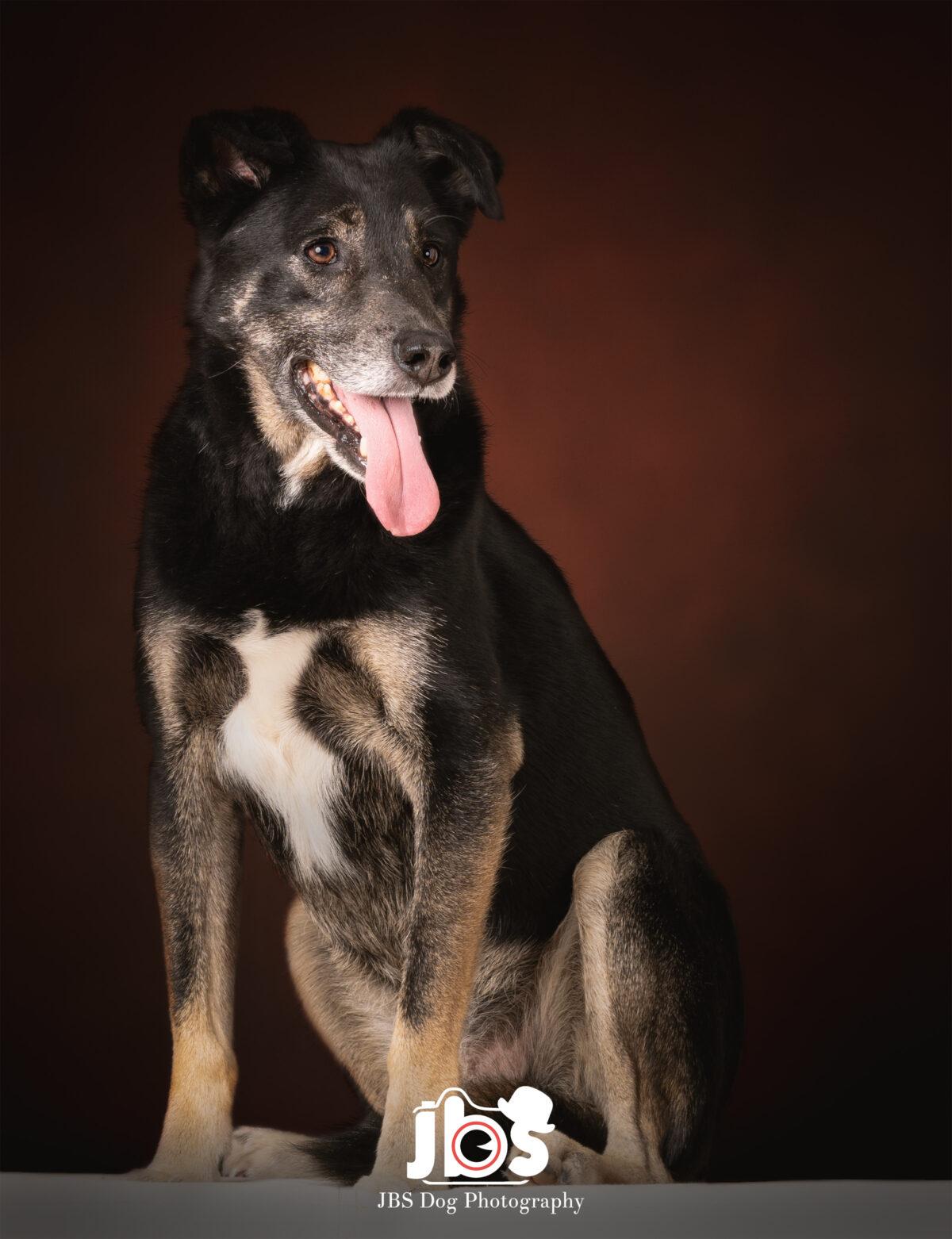 At this point you might be asking, “What happened to the dogs in Romania?” Let me give you a brief overview.

In 1980 the majority of dogs had homes but the dictator, Nicolae Ceaușescu had the bright idea of relocating all the citizens from the countryside to the city, so dogs were abandoned. Nature took its course and the population of homeless dogs multiplied. In 1989 communism fell and by 2001 in just Bucharest alone there were 70,000 dogs.

Between 2001 and 2008 over 144,000 dogs were killed in Bucharest alone. The killing was not covered by the media and it is estimated a 9 Million euro budget was used for the killing. By 2008 the catch and kill initiative resulted in reducing the dog population to 40,000 and this low number was thanks to small non-profit organisations who sterilised a lot of dogs.

In 2013 a 4-year-old and his brother ventured onto some private property and the 4-year-old Ionut Anghel was killed by a dog attack. The dog which killed Ionut was a security dog and not a homeless dog but this did not matter, the media, public figures and President instigated a hatred for homeless dogs and promoted a mass killing to rid the country of homeless dogs. The death of Ionut also provided the authorities with a 3 million euro budget to kill the homeless dogs. By now, the public were divided into two camps, dog haters and dog lovers.

Between 2013 and 2014 dog haters killed dogs, vandalised dog clinics and burnt down homeless dog shelters. In 2015 European and Romanian dog lovers started to take pictures to reveal to the world the plight of dogs in Romania. The dog lovers and dog haters contradicted one another with their pictures.

In 2016 the authorities favoured the killing of dogs over the Catch, Neuter and Release method. Alas the public dog shelters offer horrendous conditions that are akin to concentration camps and the dog haters continue to kill dogs by any means that take their fancy, wood, gun, vehicles etc.

Today there are many charities that help get dogs out of Romania into loving homes but it is like painting the Forth Bridge, a never-ending job! But if it is at all possible to give just one dog a good home, then that is better than doing nothing. 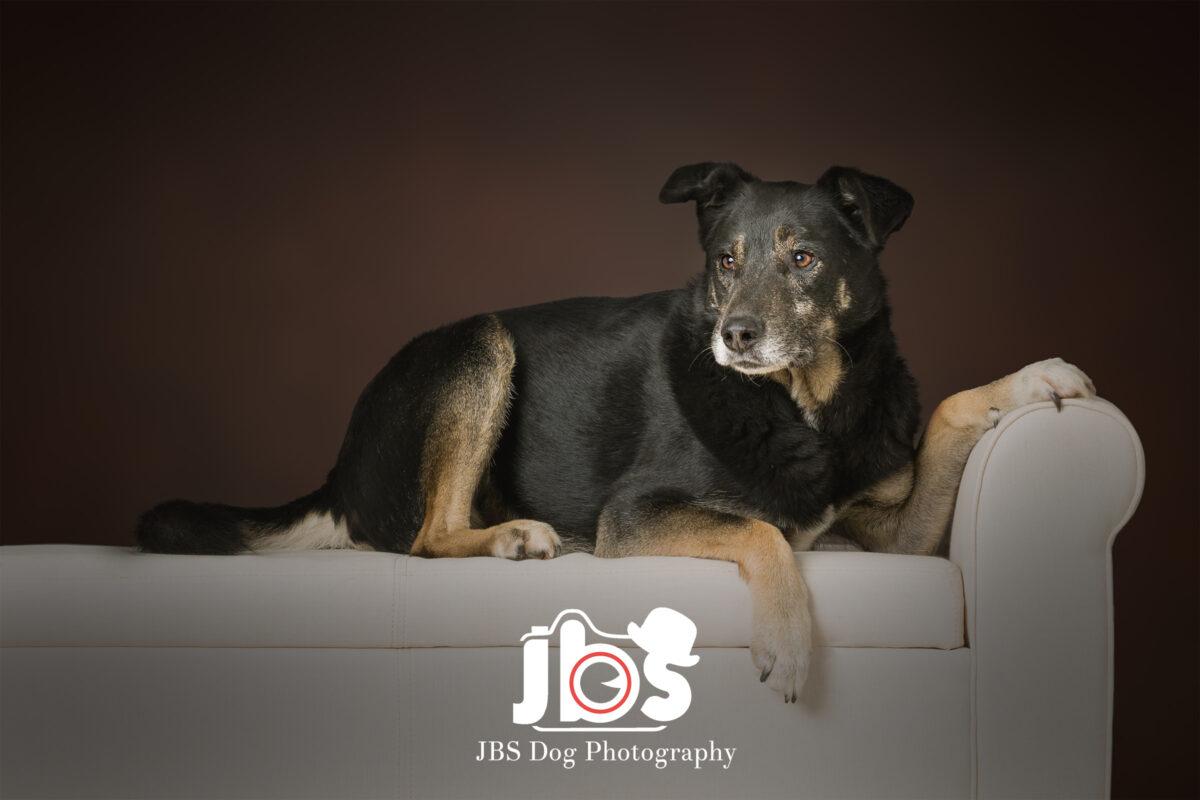 By the end of the two-hour photo session, Buster had relaxed and was a lot happier in the studio, and was very happy to pose with Taz.
Whilst Jeni and I were reviewing the pictures I had taken in the Dog Photography session, Buster got within a couple of feet of me, I was unable to stroke him as he was just too nervous but you could really see he wanted to come and say hello and have a cuddle. I think after another hour I could have really made a new friend! 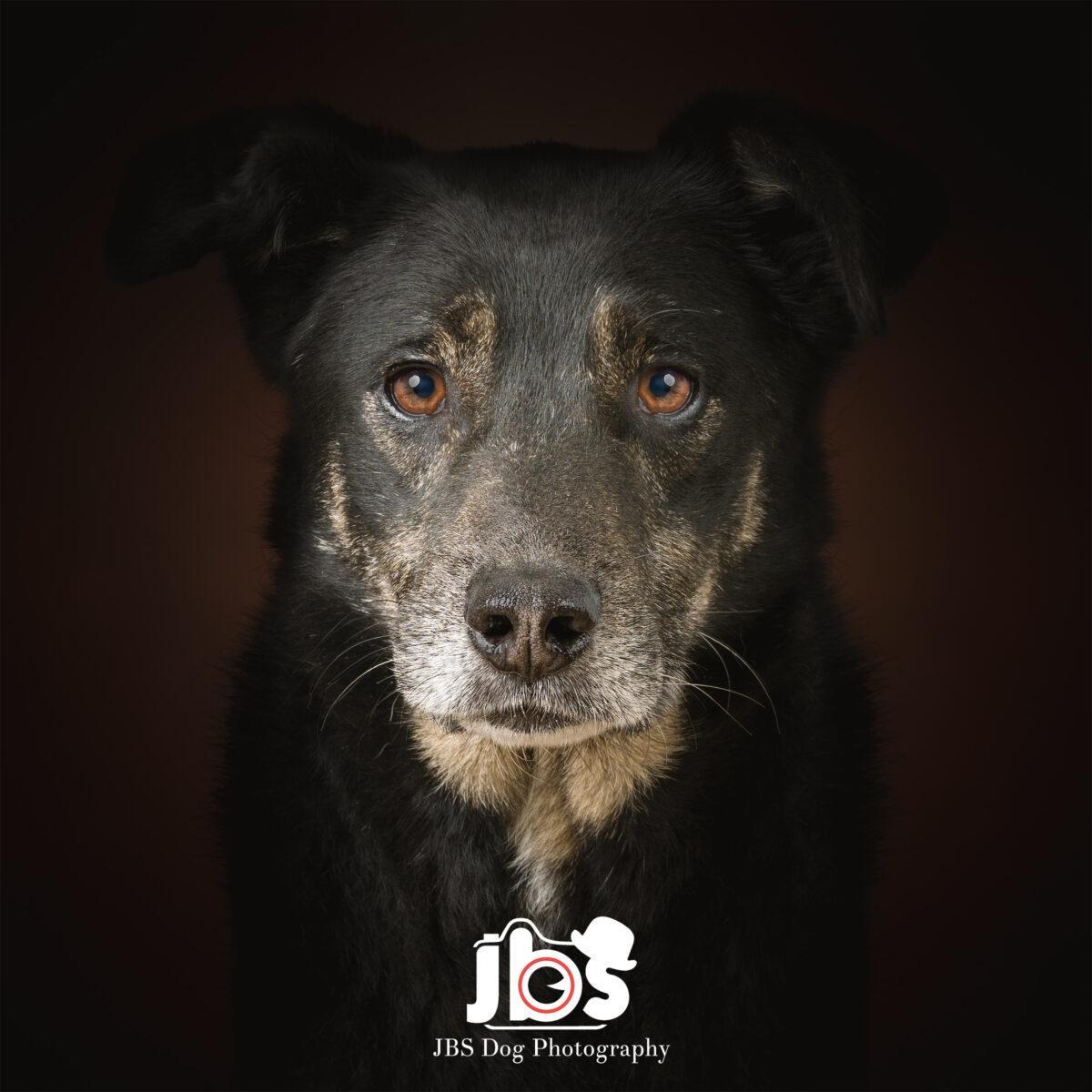 Can you adopt Buster our Rescue dog?

Buster gets on very well with other dogs and if you look into those eyes you can really see he has an incredible amount of love to give. If you already have a dog and are looking for a second or are simply looking for a little bit of company and have a loving home to give to Buster, then please do get in contact with the Dog Rescue Charity “Eli For Animals”. 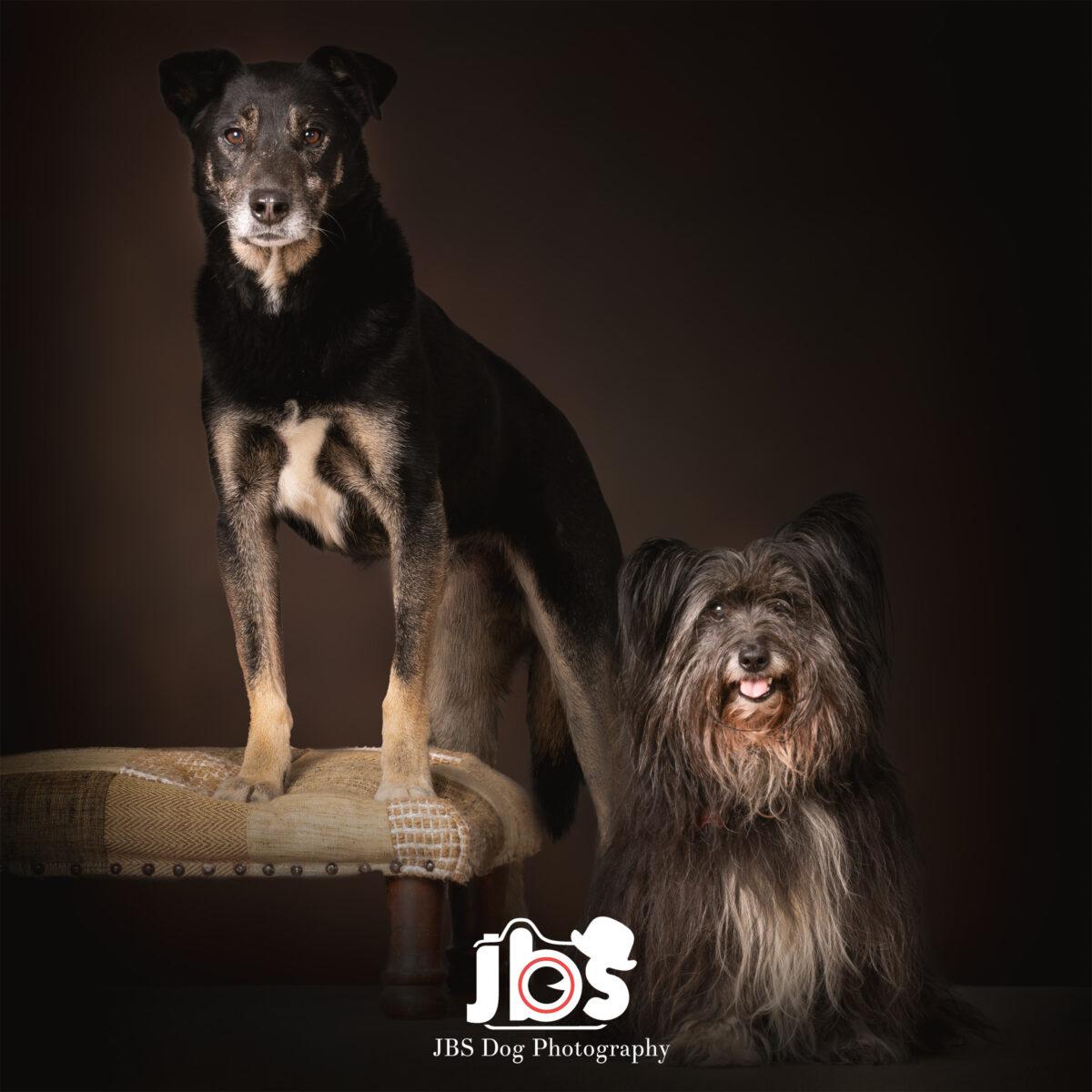